As a consequence of a bankruptcy petition being presented to the High Court, and after leaving England to avoid the ignominy of having to attend a public examination of his debts and circumstances (he'd had to do that over twenty years earlier), the Honourable "Bobbie" Beresford needed to do something to earn a bob or two; this book, which he published privately in 1926, would appear to be just that. I doubt that it was his only source of income though, and suspect that he received a regular allowance from his brother, the 5th Baron Decies, to keep himself in at least a degree of the style he was accustomed to whilst abroad; possibly with the condition attached that he didn't return home and embarrass the family further. This was ninety years ago, and so it's unlikely that anybody (even amongst the present Decies family) will be able to offer up anything additional regarding Mr B's relocation to the French Riviera in 1925.

Beresford's Monte Carlo contains a mish-mash of content for the benefit of visitors to his adopted home area; a background history of the resort, pointers on where to go and what to do, overviews of recreational facilities, hotels and restaurants and all topped off with a re-hash of Mr B's earlier published nonsense around getting rich at the casino's expense. I obtained a later edition from an out-of-print book dealer recently which has a cover price of F45.00; almost double that of the first edition (F25.00), and possibly an indication of how the French Franc was in freefall on the international currency markets during the second half of the 1920's (the £/Sterling price on both editions is given as five shillings, which at today's value is around £13.25).

The travel related chapters are a fairly easy and informative read, and would have been useful to anyone visiting the resort from the UK when they were written. Mr B reports on the opportunities for playing golf and tennis in Monte Carlo, sea fishing and the Winter sports available further north up in the mountains. Pigeon shooting (something that was quite obviously his own passion in earlier times) and Yachting receive their own dedicated chapters of fifty and thirty pages respectively, with the Yachting chapter including his recollections of past trips to Corsica and Italy. The village of Cap D'Ail (a threepenny tram-ride from Monte Carlo) is singled out for particular praise, which is no great surprise as it was Mr B's adopted home.

As part of his overview of living in Monte Carlo and the surrounding area, Mr B comments on the attractive cost of living there and gives examples of how an Englishman's money could go a lot further when compared to back home. He writes it's possible to enjoy an acceptable standard of board and lodging for around 10/- (ten shillings) a day and of being able to restrict "out-of-pocket" expenses to the sterling equivalent of just a few pence a day; for a daily paper etc. At the time of writing the run on the Franc had resulted in an exchange rate of 122 Francs to the pound, and to give an example of the purchasing power of an Englishman living on the Riviera, dinner at the best hotels in town (eg the Metropole, Hotel du Paris) would set a diner back around F35.00, which is around £16.50 at today's value. At the other end of the scale, Mr B's describes one of his regular eateries, the Petite Riviera restaraunt (where "we little chaps toddle off to"), that served a three course menu for F7.50 (the equivalent of 1/3d or £3.30 at today's value).

This final point provides a clue to the Honourable Mr B's reduction in circumstances over those he'd enjoyed for most of his life. Although not referred to directly, there are several clues between the lines; one being a recollection that he was owed F1,400 by the casino as a result of a croupier paying out his winnings to another player in error, and his acceptance that "Since my days as a principal have passed . . .", ". . . those seventy louis will never see their rightful home again". From an original insert I found in the copy of the book I received, it's clear that he looked to increase sales of his book by sending it out on approval, and I'm sure he made a point of gathering names and addresses of prospects from his family contacts and local social network on the patch for this purpose. 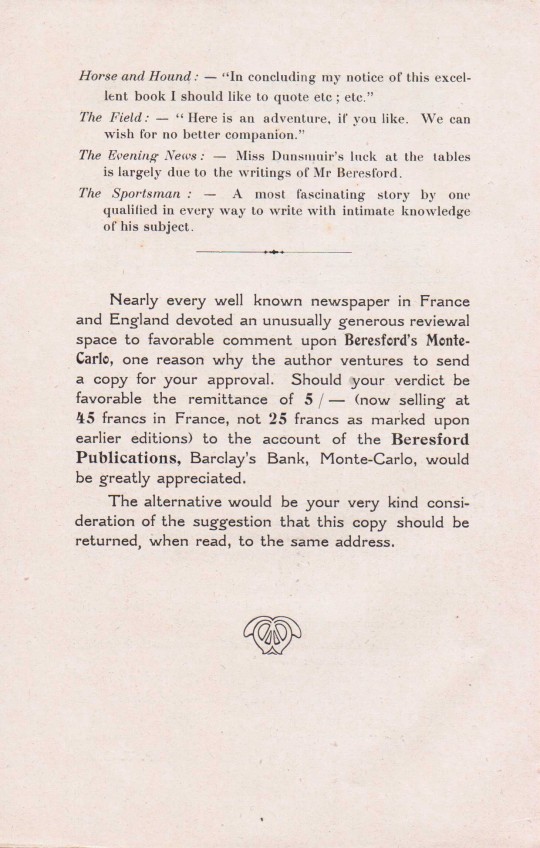 A final word with regard to the "Anecdotal" aspect of the book. This is a chapter composed of a collection of stories from the gaming rooms of the Monte Carlo casino, over many years prior to the book's publication (one's recalled from before the Boer War), which for the most part are mundane and nothing; ie a rat took up residence in the gaming hall, someone almost died of embarrassment after he unwittingly offended against table etiquette and tried to place a bet after the croupier's call, instances involving some of the regulars of the time. He does write of "Grand Dukes" and "English Snobs", asserting ". . . that beyond all argument we (the English) own the worse snobs", and of how an English Duchess who played roulette frequently was regularly fed with unearned winnings in order to keep her in good humour and the entourage she attracted returning. He comments that anyone favoured with both a title and money was "indeed a god". No change there then?

In conclusion, as the "system" Mr B promotes in this book is as worthless as all the rest, Beresford's Monte Carlo is purely a read for those having a historical interest in Monte Carlo, or possibly for those with a curiosity around the life of Seton Beresford himself (ie me!).